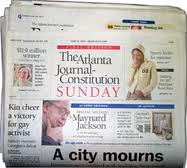 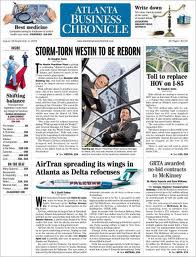 The Atlanta Journal and Constitution is the city's major paper. For information on the paper, both history and availability (digital, paper and microfilm), click here.

Atlanta Business Chronicle is one of the city's leading business news sources. Paper issues are available in the stacks at HF1.A84.

Atlanta Newspaper Guide is an excellent guide to Emory's collection of local and historic papers in a variety of formats.

Some specialized news databases include:

Ethnic NewsWatch is full-text collection of U. S. newspapers, magazines, and journals of ethnic, minority, and native presses, searchable in English and Spanish. This database includes both current (1990-present) and historical (1960-1989) indexes

New York Times. Times Topics. Links to news articles on a wide variety of subjects as well as links to other sources.

Television News Archive at Vanderbilt University is the world's most extensive and complete archive of television news. The collection holds more than 30,000 individual network evening news broadcasts from the major U.S. national broadcast networks: ABC, CBS, NBC, and CNN, and more than 9,000 hours of special news-related programming including ABC's Nightline since 1989.NOTE that this archive is for national news. All the major Atlanta stations maintain websites with current and some older newa broadcasts.

The following general databases also include a number of news sources:

Factiva lets you quickly search nearly 8,000 publications in 22 languages, including the world's most prestigious publications, local sources and the Reuters and Dow Jones newswires. In addition, Factiva.com is the exclusive archive of The Wall Street Journal. You also can search the content of more than 9,000 Web sites.

LexisNexis Academic Universe covers as wide variety of newsources including the Atlanta-Journal Constitution.

Google News Archive is a new initiative to make more old newspapers accessible and searchable online by partnering with newspaper publishers to digitize millions of pages of news archives.You will be able to search these newspapers and you'll also be able to browse through them exactly as they were printed -- photographs, headlines, articles, advertisements and all. You can explore this historical treasure trove by searching the Google News Archive or by using the timeline feature after searching Google News.

PressDisplay contains full-text reproductions of newspapers from around the world as well many for the U.S. including most major cities. Very current with a 60 day backfile. Includes The Atlanta Journal-Constitution.

For more information on locating newspapers in various formats, check the following research guide: How Do I Find Newspapers?

Of interest, Georgia stories from the New York Times series "How Race is Lived in America" which won the Pulitzer Prize in 2001.