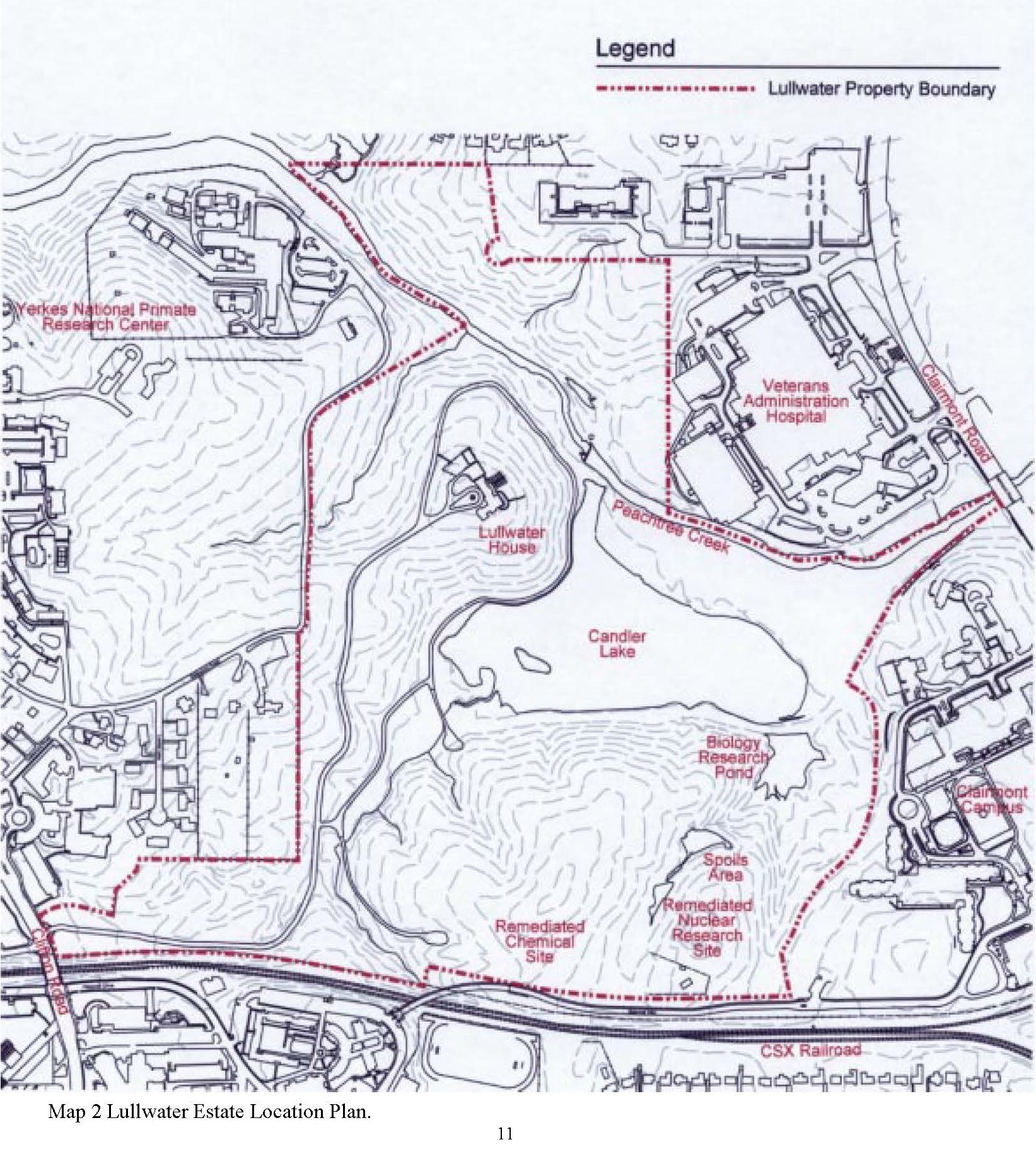 In 1995, a shuttle road was proposed that would connect the VA hospital to Clifton Rd. The problem was immediately apparent--the road would cut right through Lullwater. When the relatively-new Committee on the Environment (COE) caught wind of the project, they immediately rejected the proposition. This decision was appealed to the University Senate, who upheld the COE's position.

However, initiatives attempting to connect the area around the VA hospital and the main campus were not done. Emory had purchased land and buildings in 1986 on Clairmont Road (what is now the Clairmont Campus), which it intended to develop into student housing. Without a way to transport students to campus more directly, residents of that campus would need to travel via Clairmont Road and North Decatur Road--further congesting already heavily-trafficked roads.

Seeking to better use and integrate the Clairmont property with the main campus, another road was proposed in 1999 to connect the two pieces of land. Rather than going through Lullwater, however, this road would simply skirt the southern edge of the property. Still, the Emory community protested: students, the COE, and faculty all raised concerns over the environmental impact of the road. In the end, after a series of debates, articles, and even a public forum, the road was constructed in the summer of 1999 and completed that fall. The road was named Starvine Way, named after a rare native plant that grows in Lullwater. 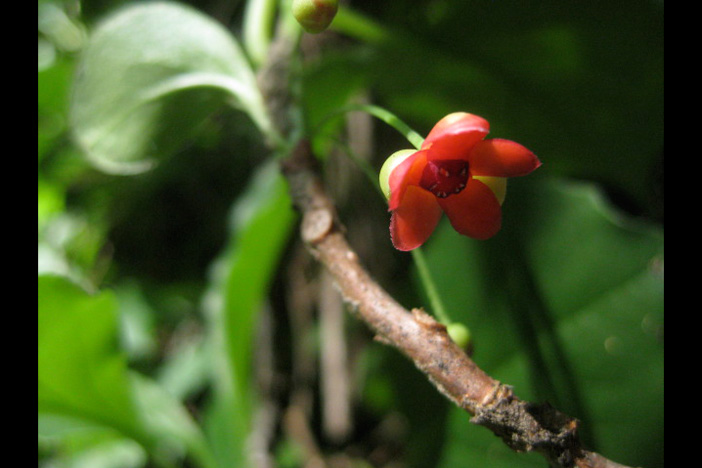 [Photo of the American Starvine by Kyra C. Wu.]

The issues surrounding the construction of Starvine Way spawned a number of transformations at Emory. In general, the movement was one towards better integration: while issues in the environment had come up throughout the previous decades, these mostly resulted in reports or studies that were read, but not necessarily acted upon. Even the COE was something of an administrative afterthought; they were more often told about construction projects (such as Starvine) rather than being involved in the discussion in the first place.

Among the groups that developed in the wake of Starvine Way were the "Ad Hoc Committee on Environmental Stewardship," headed by Anthropology professor Peggy Barlett, and the Friends of Emory Forest, a group of Emory and Druid Hills community members invested in protecting Emory's forests from development and invasive species. 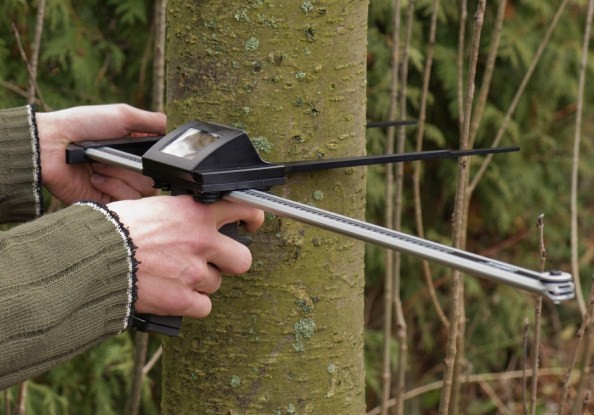 Expanding on 1993's "Statement on Forest Use," the No Net Loss of Forest Canopy Policy spells out in detail how canopy coverage is calculated along with rules for ensuring no net loss. Using a tree's Diameter Breast Height (DBH),

As the document puts it, "The total replacement canopy shall meet or exceed the total canopy area of removed trees" (3). 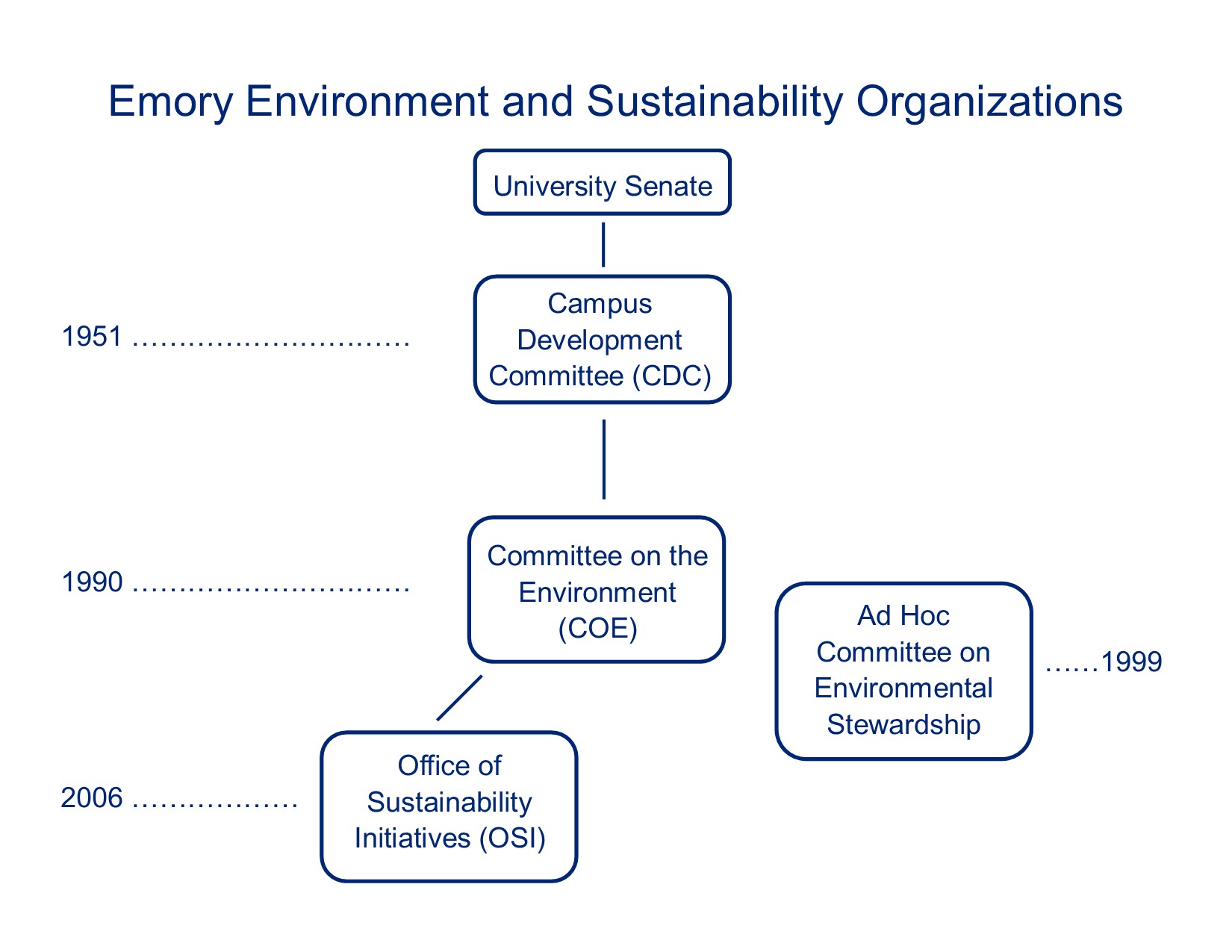 Not all environmental and sustainability efforts at Emory happened under campus administration. In September 1999, anthropology professor Peggy Barlett met with 21 other people discuss organizing an ad hoc committee to address environmental concerns. Eventually, this became the Ad Hoc Committee on Environmental Stewardship, an organization of Emory faculty, staff, and students that helped raise awareness of environmental issues on campus and supplemented work by other campus organizations such as the COE.

Among the Ad Hoc committee's accomplishments are the creation of various Emory woods walks, ivy pulls, and the creation of the Environmental Mission Statement, a document that would subsequently influence Emory's policies by establishing a commitment to environmental stewardship as a principle of Emory's development.

Later, the Ad Hoc committee would also found the Faculty Green Lunch Group,  This, in turn, led to the creation of the Piedmont Project. 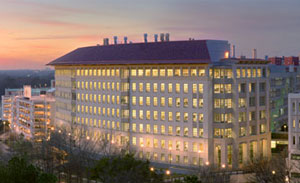 2000-2001 saw the construction of the Whitehead Building, which roughly coincided with a few faculty and staff attending a Second Nature regional conference in Atlanta. Among other presentations participants were introduced to the relatively-new (1998) Leadership in Energy and Environmental Design (LEED) program. Excited by the conference, John Fields, Laura Case, Bill Chatfield, Robert Hascall, and others worked to convince President Chace that the new building should be designed in such a way as to obtain LEED certification. Chace was persuaded by their case, and along with the Board of Trustees set in motion plans to make Whitehead the first LEED certified building on Emory's campus.

Capitalizing on the campus interest in preserving its natural environment, and the "Nurturing a Green University" workshop, Professors Arri Eisen and Peggy Barlett organized a program around environmental and sustainability issues in 2001. Drawing from a program at Northern Arizona University entitled "The Ponderosa Project," The Piedmont Project educates faculty about the environment and sustainability and helps them develop classes that address such issues.

Following the 1999 construction of Starvine way, university officials and select faculty felt that Emory's ostensible commitment to protecting its forests and natural environment was at odds with its campus development goals (a fact Robert Platt had pointed out nearly 30 years prior). Although the Forest Use Policy of 1992 had espoused a policy of "No net loss of forest," it was more a statement of principle than a practical guide to development. It left unclear, one, how Emory University would carry out such a policy and, two, how Emory would relate more broadly to managing its natural environment. 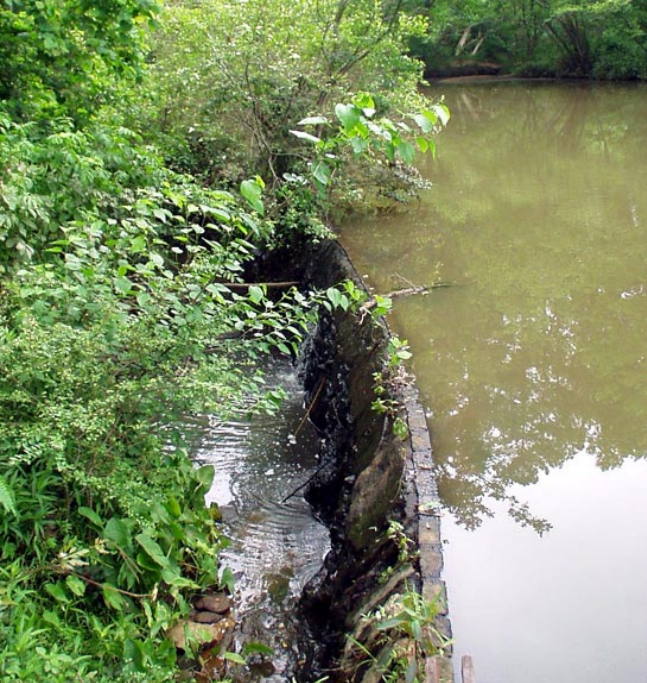 [Picture of Candler Dam, which the report notes "needs to be repaired in order to prevent a catastrophic flood of water and silt into the road and into South Fork Peachtree Creek" (7).]

The Lullwater Comprehensive Management Plan was submitted by the Lullwater Task Force subcommittee (of the COE) in September of 2002. The plan was developed in response to a need for a concrete document to manage Lullwater, a document that detailed the status of the preserve and its contents. 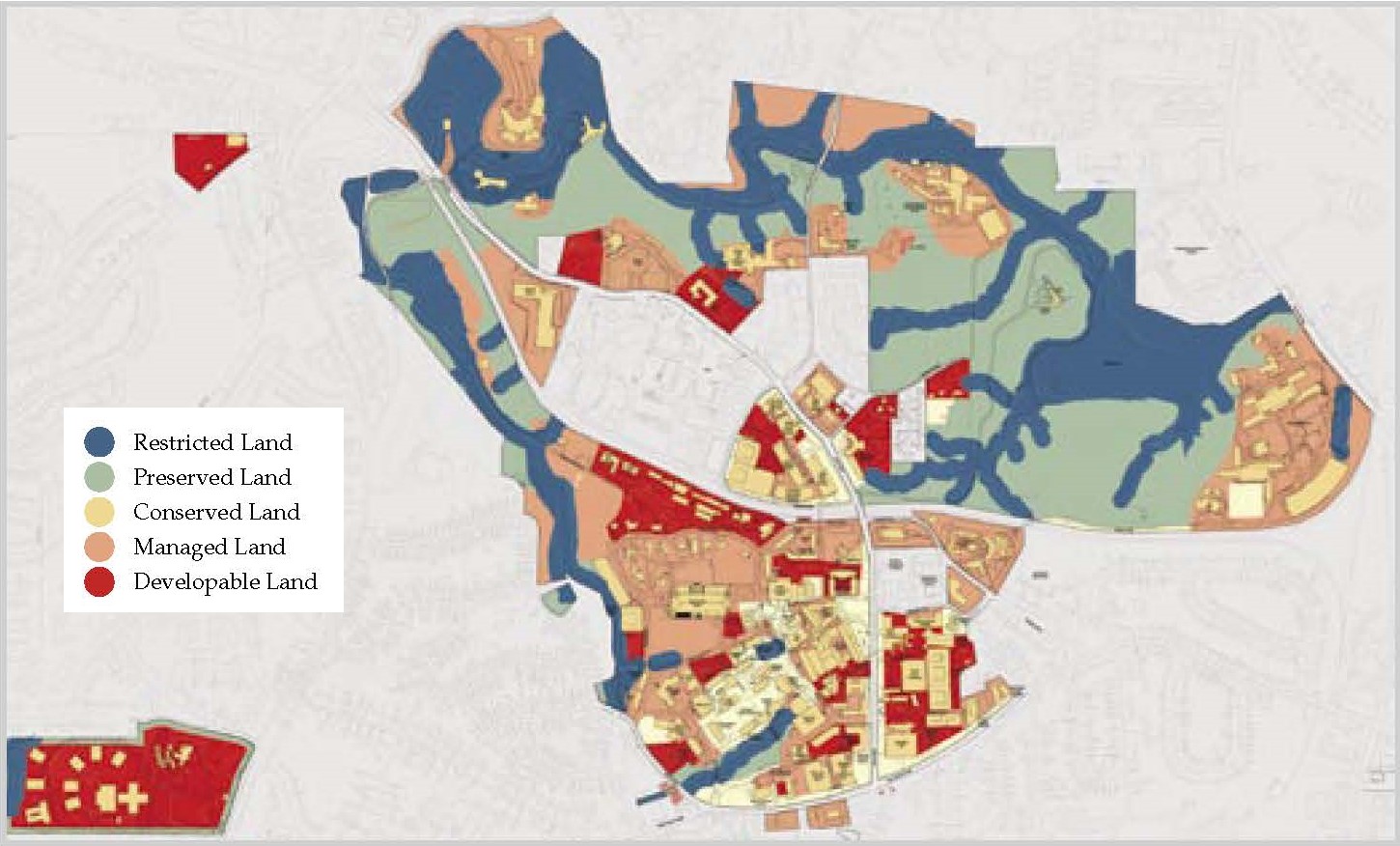 Going back to the Murdy-Carter Report (1986), Emory had designated certain areas as ecologically significant, which would (in theory) inform subsequent campus developments.

The insufficiency of the Murdy-Carter Report for policy and the increasing interest in environmental policy at Emory in the early 2000s thus led to the creation of the Land Classification Plan, assembled by the Committee on the Environment (COE).

The plan was subsequently included in a 2005 update to the campus master plan.

"During the strategic planning process of 2004-5, sustainability was identified as a fundamental principle guiding the university. In the spring of 2005, President James Wagner created the Sustainability Committee and charged it with the task of developing a vision for the responsible environmental, economic, and social future of Emory." - From the "Sustainability Vision for Emory" report.

While earlier documents about Emory and its environment often focused on conservation or restoration of natural resources, little attention had been formally given to the topic of sustainability. This changed in 2006 with the publication of the Sustainability Committee's "Sustainability Vision for Emory." The report details sustainability goals for not only Emory's natural environment, but also in its built environment and throughout the Emory community.

The document focuses primarily on articulating both specific goals and recommendations to achieve those goals, focusing on five areas:

Crucially, among its recommendations was the "Appoint a Director for Sustainability to catalyze and coordinate university efforts." Over time, this led to the development of an office specifically dedicated to sustainability: the Office of Sustainability Initiatives.