Though Emory University is perhaps now best known for its central location in Atlanta, it started as a small college in Oxford, GA in 1836. It was not until 1915, thanks to a land donation of 75 acres and one million dollars from Asa Candler, that the Atlanta campus was established.

In these early years, interest in Emory's environment was primarily aesthetic. Discussions of preservation of local foliage and forests was primarily justified in terms of preserving local natural beauty. This was included in the language of the original 1915 campus master plan, designed by Henry Hornbostel. Hornbostel, upon seeing Druid Hills, was reminded of Northern Italy, and wanted to design a campus reminiscent of that area. This resulted in a quasi-villa look that employed local pink and white Georgia marble. Beyond the buildings, Hornbostel envisioned a campus integrated with its natural environment, rather than dominating or "taming" it. The ravines around the area, for example, were seen as "unique features of the site that would embellish the design."

Administration at the time was somewhat less concerned with preserving the natural environment. From that perspective, the surrounding nature was seen either as an obstacle to progress, i.e. the development of the university and its property, or as a resource to be used, e.g. for lumber. An early exception was biology professor Woolford B. Baker, who complained to President Harvey Cox that building and development was destroying the unique beauty of Emory's natural surroundings. His complaints were mostly ignored (although he did secure a $250 per year fund for his nature projects), but one marked success still stands: the ravine behind the Carlos Museum (now called the Woolford B. Baker Woodlands) was preserved as an "example of what the campus used to be" (Seideman, 74). 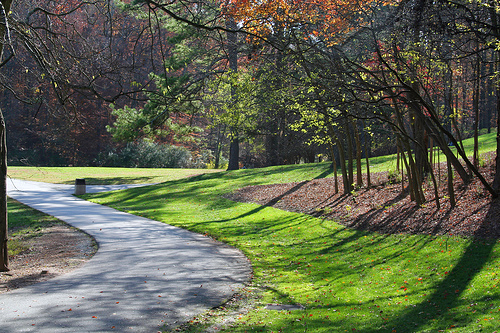 [A path in Lullwater. From http://filming.emory.edu/LocationsandFees/Lullwater.html]

An iconic feature of Emory University's campus, the Lullwater Preserve was not always officially associated with Emory. It was not until 1958 that Emory formally purchased the estate, from the Candler family. The Candlers had a long history with Emory; Asa Candler was responsible for the initial land and monetary endowment of the Druid Hills campus in 1915, and his son, Walter, was both an alumnus of Emory University and the owner of the Lullwater Estate. In 1963, the property became a park, intended for use by the Emory community.

1970 - The Quality of Emory's Natural Environment

In 1970, spurred in part by the first Earth Day in April of that year, Emory Vice President Orie Myers requested that Professor Robert Platt assemble a report on the status and ecological health of Emory's forests and natural environment.

In October, a group of graduate and honors students from Biology 306 (Advanced Ecology), headed by Professor Robert Platt of the Biology Department did just that. Together, they assembled one of the first extensive reports on Emory's natural environment. The report was something of a wake-up call: the first lines of the report read, "The primary conclusion drawn from this study is that the quality of the Emory University environment has significantly deteriorated over the past 20 years with respect to its soils, vegetation, water, and air" (3). The study warns that, without a more proactive stance, "irreplaceable natural assets" of the campus will mostly disappear within the next 10-20 years. The study warns further that although Emory touts its lush, natural, green setting, without intervention that setting will disappear. As one of its key recommendations, the study outlines "A Comprehensive Master Plan for a Quality Natural Environment," which details suggested additions to the recent (1969) campus master plan (20).

Written by [Richard P.] Dober and Associates, Inc., "A Plan for Advancing Certain Environmental Improvements" is interesting not so much for what it does say as for what it doesn't. Despite its title and despite the significant frequency with which the word "environment" is used in the report, environmental issues as we may think of them are nearly absent from the report. Put in the larger picture, the report suggests that at the higher levels of administration in 1973, thinking about the "environment" was not yet thinking about the natural environment.

This relative lack of attention is exemplified by the sole paragraph in the report devoted to the Emory's "landscape":

"Our campus poll and our observations indicate that Emory's environment needs as much attention as interior spaces. With the launching and completion of our proposals, there will be an opportunity for improving the College quadrangle which would include the addition of trees, ground covers, benches, lighting and signs. Designs for various aspects of the program should advance as soon as the sites for proposed new construction have been settled" (102).

Dober's report resonates far more with the past of Emory's thinking about the environment--in terms of its aesthetics--than its future: a turn towards conservation, management, stewardship, and sustainability.

In the summer of 1974, an estimated 30-50 pounds of metallic mercury was buried in the Lullwater Estate. In some regards this was not unusual; non-radioactive chemicals were disposed of in Lullwater for a number of years. (This isn't to say these chemicals were safe--a list of burial disposals from 1974 includes 2 gallons of an arsenic solution and a container labeled only "Carcinogenic Wastes" [17]). The mercury, however, was dumped "by mistake" (1). Further, mercury is known for its high levels of toxicity, a concern for both local residents and the Emory community.

The incident was first reported by the Emory Wheel in a September 1974 issue.

That fall, a group of students (Wendell Cropper, Mark Harwell, John Hay, and John Schalles) in Biology 306-Plant Ecology, assembled a report on the matter as their class project. The group took samples from the soil, plants, and water in the area, finding that the mercury had flowed downhill and been absorbed by soil in the area (13-15). 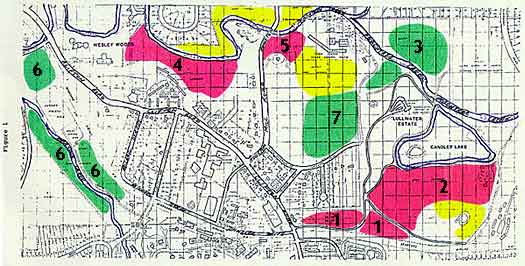 In 1986, Candler Lake was dredged, and the silt from that project was unceremoniously dumped at a nearby hill. The hill itself was near an artifical dam, which breached shortly thereafter, sending the silt throughout the area. This event caused significant concern over the ecology of Lullwater, leading professors William Murdy and Eloise Carter to undertake a study.

The subsequent Report on the Status of Forested Land of Emory University (aka the Murdy-Carter Report) acted as a reference point in many subsequent policy decisions and discussions surrounding Emory's environment. It details the status of forests on Emory property, and notes that several are incredibly and uniquely well-preserved slices of native hardwood forests.

The Murdy-Carter report drew attention to the significance and uniqueness of Emory's natural environment. Thanks in part to their work, Emory began to see itself more in the role of a steward of ecologically-important areas.

1990 - Committee on the Environment

Chaired by Harvey Ragsdale, then of the Biology department, the COE initially directed its efforts towards two main projects. First, following on the efforts of the student-led group Students Involved in Resources and the Environment (SIRE), the committee recommended that Emory commit itself to promoting recycling efforts in a variety of forms. Three projects were mentioned: promotion of student recycling in dormitories, institutional commitment to using products made from recycled materials (especially paper), and a comprehensive waste management program. Second, the Committee urged the importance of addressing the storage of mercury in Lullwater Preserve. Initially buried there in the 1970s by the chemistry department, the storage adhered to the minimum requirements for the storage of dangerous chemicals. Nevertheless, the Committee emphasized that seepage into the ground and local water sources was quite possible, and that the chemicals could not safely be kept there indefinitely.

The COE continued to spell out Emory's commitment to preserving its natural resources and fostering an eco-friendly campus in a series of other documents released in ensuing years. The first of these was the Statement on Forest Use (1993). Drawing on the 1986 Murdy-Carter report, which emphasized the unique biological and ecological composition of many forests on Emory land, the statement called for the preservation of certain key forests which contained rare and endangered species of trees. In addition, the statement called for a "No net loss forest" policy, meaning that for any tree Emory removed (for construction purposes or otherwise), Emory would then plant a tree elsewhere as a replacement. Other documents include the Statement of Principle on Water Usage (1995), which outlines Emory's policy regarding water conservation, water pollution, and flooding in relation to campus building and developments and the Motion Concerning the Impact of Transportation on the Emory Environment (1996). The latter document, spurred in part by the 1996 Atlanta Summer Olympics, outlined some concerns over the impact of traffic on Emory's campus.

Founded in 1990, Emory Recycles began by simply recycling white paper. Since then, they have expanded to numerous other materials, including aluminum, cardboard, glass, plastics, scrap metal, electronic items, and various hard-to-recycle items. 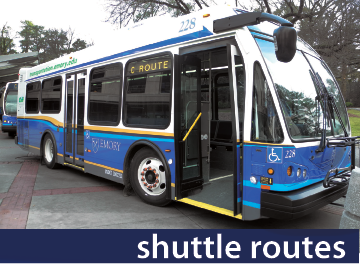 [Photo of an Emory shuttle on Route C. Image from http://transportation.emory.edu/]

As early as 1989, Emory had discussed the idea of having shuttles for its faculty, staff, and students. Parking was a longstanding issue at Emory, and shuttles were seen as one way of addressing the issue. It was not until 1997, however, that the first shuttle service managed by Emory began. The Clifton Corridor Transportation Management Association, consisting of Emory University, Emory Hospitals, Emory Conference Center Hotel, the Centers for Disease Control and Prevention, and the City of Decatur, started a service that would benefit each of its members, running primarily along Clifton Road.

A few years later, as part of a concession in the construction of Starvine Way, seven 100% alternatively-fueled shuttles began service transporting individuals from the Starvine Parking Deck to Woodruff Circle.

1998 saw the publication of a new master plan, intended to guide campus development for the next several decades.

The plan, like many before it, often spoke of Emory's natural environment in aesthetic terms. This isn't especially surprising: one of the stated goals of the document is "To make Emory University an even more beautiful place" (4). At the same time, there is a more explicit awareness of the ecological significance of Emory's natural environment. The plan references the Murdy-Carter Report (1986), and explicitly notes that beyond their aesthetic value, trees do things like "cleaning and cooling the air" (11). Water, too, is addressed vis-a-vis its ecological importance (12).

However, despite this rising awareness of the significance of Emory's natural environment, the plan is almost completely lacking in any consideration of conservation, sustainability, or preservation. It would take the construction of Starvine Way the following year to truly instigate that conversation.