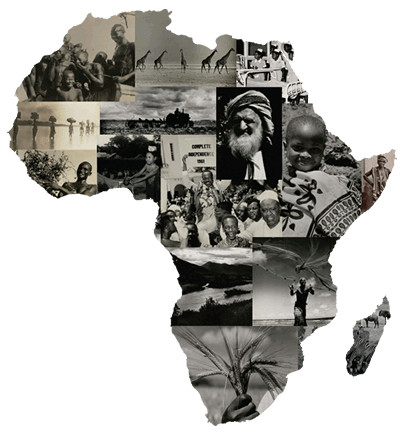 "Photographs" Africa South of the Sahara. (Stanford) Excellent source of links to current and historical photographs.

Check also under "Electronic Collections" for other digitized photographs.

Africa through a lens is an online collection of thousands of images taken from a broader photographic collection of Foreign and Commonwealth Office images, held at The National Archives. Starting with some incredible early photographs from the 1860s, the images span over 100 years of African history and cover 20 countries.

The collection was brought about by the request of the Secretary of State for the Colonies in 1869. He asked governors to arrange for the taking of photographs of 'noteworthy buildings and scenery ... together with individuals of various races peculiar to the colony'. Each governor interpreted the task in his own way, which has culminated in this unique and varied collection.

The original records include what appear to be personal scrapbooks, official albums, printed pamphlets and even framed photographs and paintings. Some images are official public information shots, others are hand drawn sketches. The number of images for each country also varies, depending on how diligently the request was carried out.

The website offers downloadable images, sound files, and other materials on Africa drawn from contributions by UWM faculty over the last 20-30 years.

African Online Digital Library (AODL) is a portal to multimedia collections about Africa. MATRIX, working in cooperation with the African Studies Center at Michigan State University, is partnering with universities and cultural heritage organizations in Africa to build this resource.

AP Archive is the film and digital video of the Associated Press with its worldwide coverage. Available through YouTube.  SEE ALSO its sister channel British Movietone which also provides historical news films. For AP photos see AccuNet/AP Multimedia Archive (Emory Only) which includes historical photos back to 1840

Flickr - Images FOR Africa "We want to collect 'Images of Africa' that are 'free to use' according to a Creative Commons License: Social documentary, structures, public transport, village life, poverty, nature, wildlife ... everything!"
Henry Martyn Centre for Mission Studies, Westminster College, Cambridge holds some 2,000 photographs dating from the late 19th century chiefly covering Egypt, Sub-Saharan Africa and India. Images cover not only the work of missionaries in fields such as preaching, conversion, education and medicine, but also illustrate the lands and the people of the nations in which they served, providing a valuable research tool for many academic disciplines. Some have been digitised and are available on their archive webpages.
International Mission Photography Archive (University of Southern California) offers historical images from Protestant and Catholic missionary collections in Britain, Norway, Germany, France, Switzerland, and the United States. The photographs, which range in time from the middle of the nineteenth to the middle of the twentieth century, offer a visual record of missionary activities and experiences in Africa, China, Madagascar, India, Papua-New Guinea, and the Caribbean.

Ross Archive of African Images (Yale) The Archive aspires to include all the figurative African objects in books, periodicals, catalogues, newspapers, and other publications appearing in 1920 and earlier - the oldest dates to 1591.

Imperial War Museum, particularly its RESEARCH COLLECTIONS. Museum has over 11 million photos, including those from African soldiers fighting for the empire. Note you can filter results by categories found in the left column, e.g. "World War II." the Musuem has sponsered exhibits on African soldiers.

Digitized and Cataloged African Posters: Posters from the Herskovits Library of African Studies

The Melville J. Herskovits Library of African Studies at Northwestern University maintains a comprehensive collection of posters published in Africa and elsewhere. The posters provide a unique resource to carry on research in a broad range of disciplines by consulting the visual image created by governments (independent and colonial) and international agencies, as well as political, labor, social, religious, educational and cultural organizations. On this web site, 366 posters, selected as a representative sampling of the collection, are available for searching and viewing.