William M. Hepburn became dean of Emory Law School in January 1950. The same year, students began working with the Atlanta Legal Aid Society for academic credit and the first Emory Law Day was celebrated. Sponsored by the SBA, Law Day included the final round of the Emory Moot Court competition, a noon barbecue, a distinguished guest speaker, and an evening awards banquet and dance. 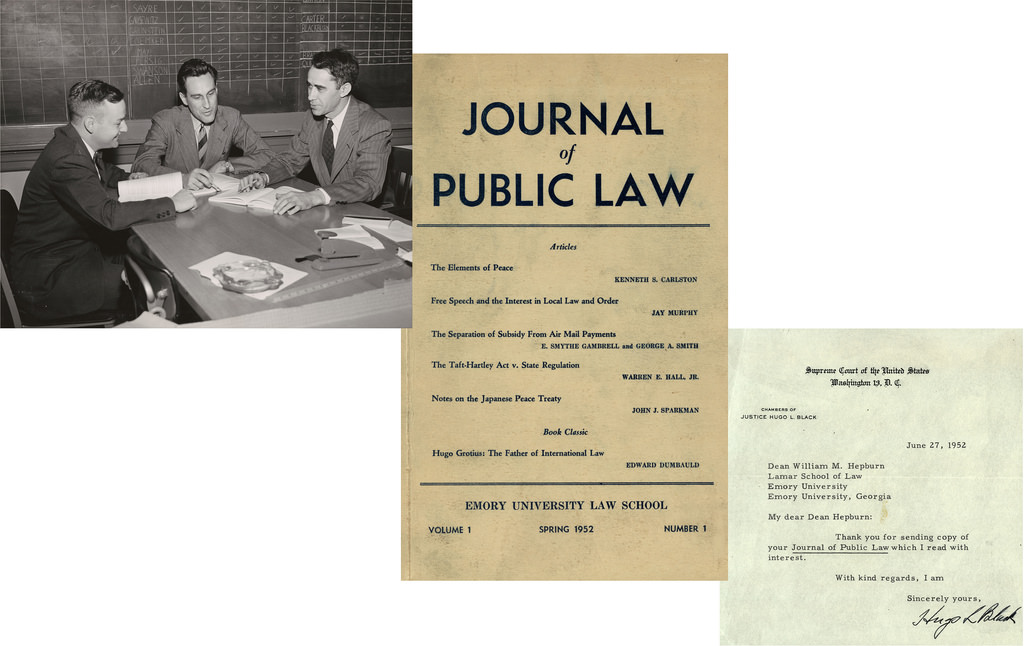 The first issue of the Journal of Public Law was published in Spring 1952. To distinguish the new law journal from its peers at other schools it was decided that it would be thoroughly interdisciplinary from the beginning. Notable early issues included Segregation in the Public Schools (Spring 1954), Law and Medicine (Fall 1954), and Religion and the Constitution (1964).

In May 1955, with the support of the Board of Trustees, the Law Alumni Association, in order to contribute to the school’s development from a “good” school of largely local influence into “one of the most outstanding law schools in the United States,” created the Law Scholarship Fund “to be used for the sole purpose of granting full or partial tuition scholarships.” An annual goal of $15,000 was set. At the time, tuition was $300 per semester. 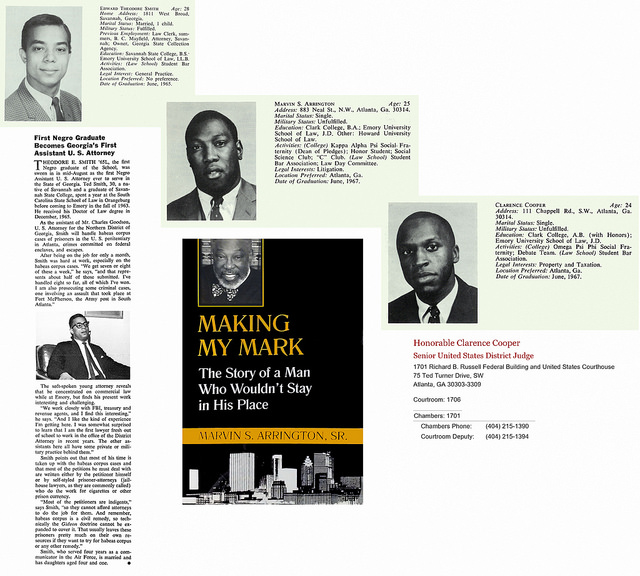 Ben F. Johnson assumed the deanship in June 1961. A few months later, he and Board of Trustees Chair Henry L. Bowden successfully represented the University in its lawsuit to permit racial integration. The case was Emory v. Nash, decided by the Georgia Supreme Court in September 1962. Johnson and Bowden had filed suit in May to strike down a state statute that prohibited private educational institutions from integrating without losing their tax exemption. The court ultimately agreed with the University and the first African American student enrolled at Emory Law School in 1963.

Dean Johnson then obtained grant support to implement a summer program called Pre-Start to recruit African American students to the law school. After two successful summers, a federally funded national program, the Council on Legal Education Opportunity (CLEO), was modeled after the Emory program. Pre-Start had helped to significantly increase both the number of African American law students at Emory and African American attorneys in the South, and everyone benefitted.

In 1967, Emory Law School received a grant in support of a new legal aid program from the U.S. Office of Economic Opportunity. The Emory Community Legal Services Center opened on Oxford Road the same year. At the Center, attorneys and law students worked together to serve the needs of legal aid agencies throughout Atlanta. The grant also financed a Neighborhood Law Office, opened in the Boulevard-Parkway area, that was staffed entirely by third-year law students and served only low-income clients.

And finally, Emory Law’s Legal Assistance for Inmates program was established in 1967 as well. In this program, law students provided legal assistance to indigent inmates at the Atlanta Federal Penitentiary. Several years later, both offices were transferred to Atlanta Legal Aid and sponsored by the local bar association.

In preparation for beginning to offer the J.D. as the basic professional degree, in Fall 1966, the law school began requiring a bachelor’s degree prior to admission. In 1967, Emory began conferring the Juris Doctor degree rather than the Bachelor of Laws. The LL.M. continued to be the most advanced law degree offered at Emory.