1. Always search in the keyword field, as you never know when the work you are searching might be in a larger collection.

2. Along with the composer name, use plurals for sonatas, symphonies, and other nondistinctive titles, even when searching for only one piece; also, don't include numerical distinctions like "no." or "op." Examples:

Why? You'll usually miss some holdings when using the singular form and number designations can vary (for more on this, read about uniform titles below).

3. Use the original language for works with distinctive titles and drop all initial articles. Examples:

4. If you can't find the work, or want more editions

Uniform titles provide consistent, standardized ways of identifying individual compositions and groups of compositions. This makes it possible to find works all scores and recordings of a work without having to look up every conceivable title the piece might have been called.  A library catalog record gives both the work's Title—meaning the title used by the publisher—and its Uniform Title.

Works with Distinctive Titles
If the work's title is distinctive, the uniform title consists of the original title (from the manuscript or first edition) in the original language. Examples of distinctive titles:

Works with Form or Genre Titles
If the composer's original title is simply a form name or genre (with or without key and number), the title is considered nondistinctive. The first word of the uniform title is the form or genre, and it's always in the plural except when the composer wrote only one sonata, nocturne, etc.Examples of form and genre terms used in uniform titles:

The instrumentation, number (ordinal, opus, and or catalog number) and key are often added to the form name.

Collections of Works in the Same Medium
This type of uniform title is used when one recording or score consists of various types of pieces that are all for the same medium. Examples:

Complete Works of Individual Composers
The uniform title Works is used for a set of the complete works of a composer. Note that many editions of complete works are still in the process of being published—volume by volume. Look at Locations/Call Number in the DiscoverE record to see which volumes are actually in the library's collection.

Here's a basic search in Library Search when you don't know the work's uniform title:

Look at one of your hits to find out what the work's uniform title is. 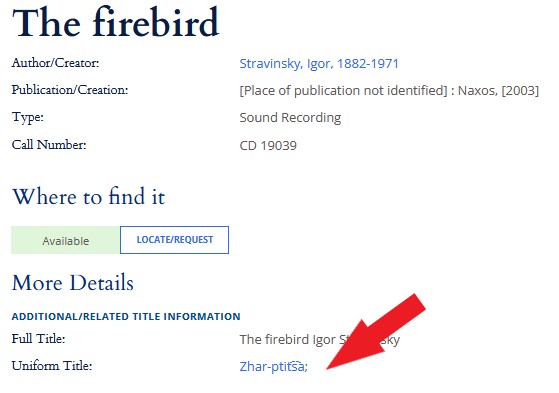 Some complete-works editions of composers’ scores are not thoroughly indexed in library catalogs.  Two of the principal ways to find such pieces are

This is a tool for locating musical scores of compositions published in scholarly editions (such as historical sets and composers’ complete works) and in series.