The LibGuide highlights the Emory Unit, also known as Base Hospital No. 43. This medical unit included a large number of personnel from Emory University and served in World War I and World War II.

This LibGuide highlights the archival collections associated with Emory's involvement in WWI and WWII. These collections are housed in the Historical Collections of the Woodruff Health Sciences Center Library.

Unless noted otherwise, these collections are available in-person only.

When Emory Went to War 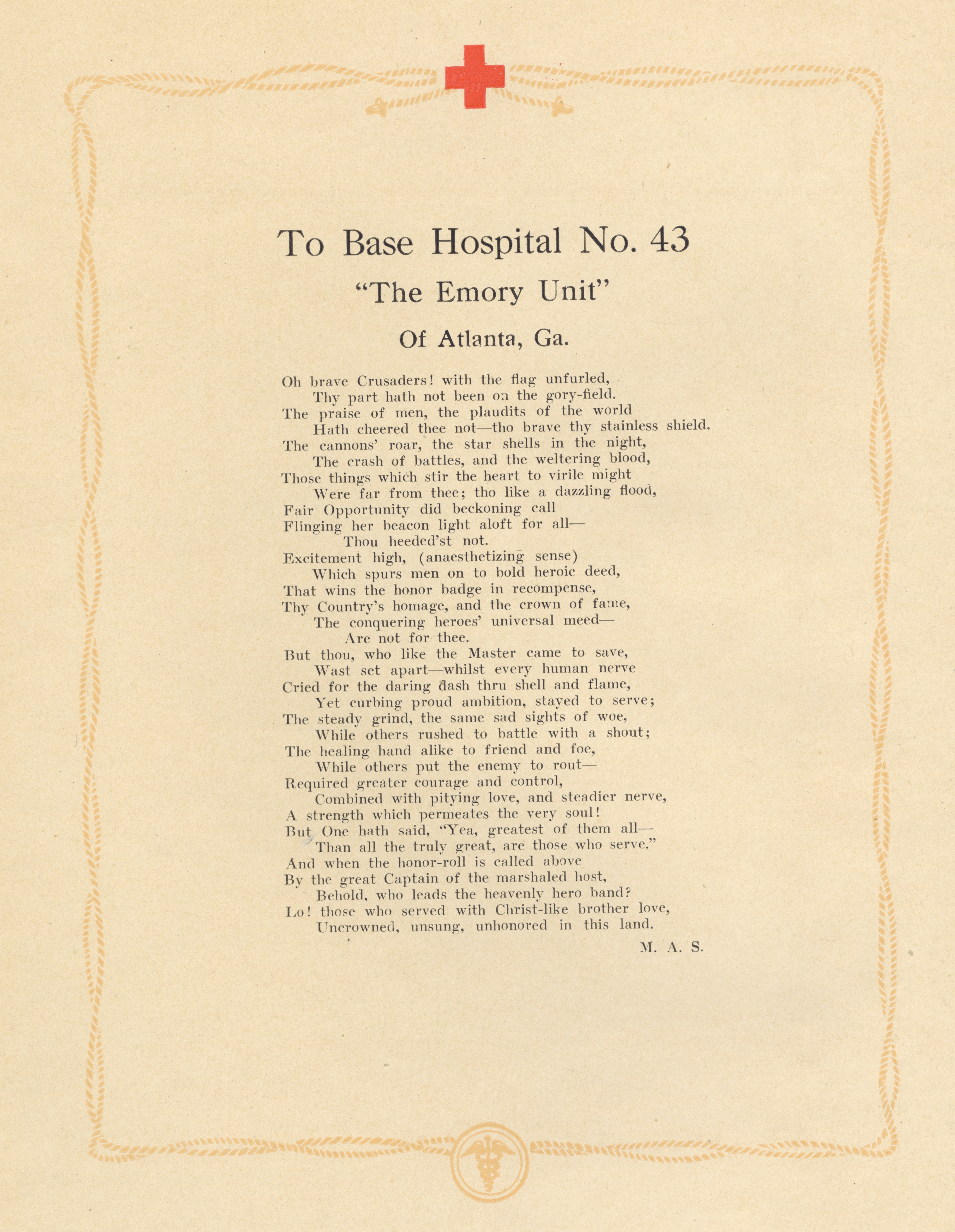 In 1917, U.S. Army Surgeon General William Gorgas called for the recruitment of medical personnel during World War I, just after the United States entered the war. The local group of 24 officers, 65 nurses, and 154 enlisted personnel trained for several months before being deployed to Blois, France in 1918. They were called the Emory Unit due to the large number of personnel who came from Emory University.

Base Hospital 43, also known as the Emory Unit, was a civilian medical regiment comprised of volunteer physicians, nurses, and other enlisted personnel. Consisting of members from the Emory community, the Emory Unit served in Blois, France, during the First World War and in North Africa and southern France during World War II.  The history and achievement of the Emory Unit can be told through the stories of its members, from the founder of the Emory Unit to the nurses, officers, and personnel.

The Emory Unit treated over 37,000 patients during both World Wars, including American and Allied servicemen, prisoners of war, and civilians. The information and photographs below provide a glimpse into the lives of those local men and women who risked much to provide medical care to the brave soldiers when they needed it most.

On July 3rd, 1918 the Emory Unit relieved Camp Hospital 25 at Blois, France. They stayed in Blois through the signing of the Armistice in November, and was relieved on January 21, 1919. By that time, the Emory Unit had treated over 9000 cases in its six-month duration in Blois, ranging from gunshot wounds and mustard gas burns, to pneumonia and meningitis.

Organized by Major Edward C. Davis in 1918, the Emory Unit was a Red Cross Hospital, officially known as Base Hospital 43, consisting of 500 beds, 24 officers, 65 nurses, 154 enlisted personnel, and 6 civilians. 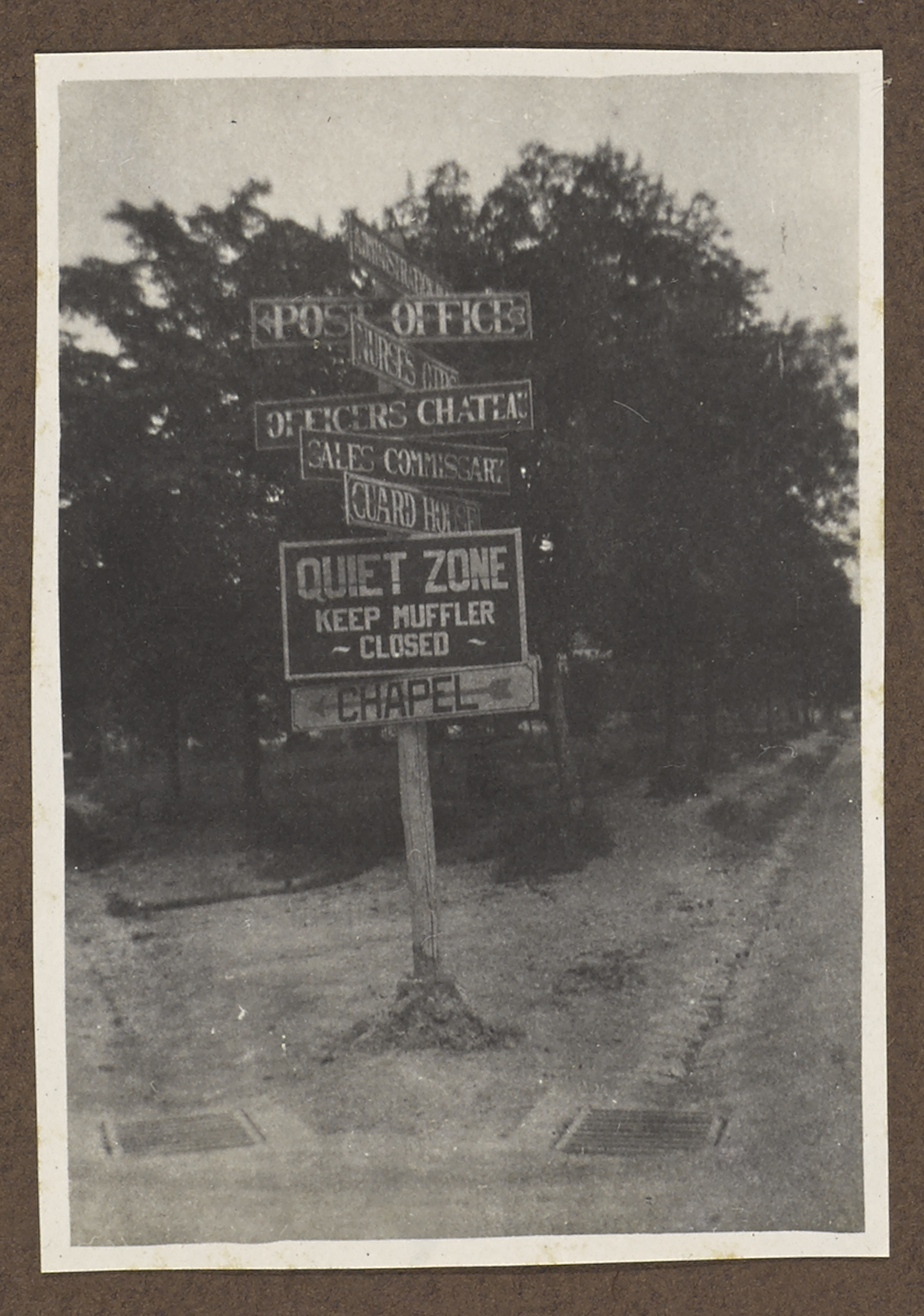 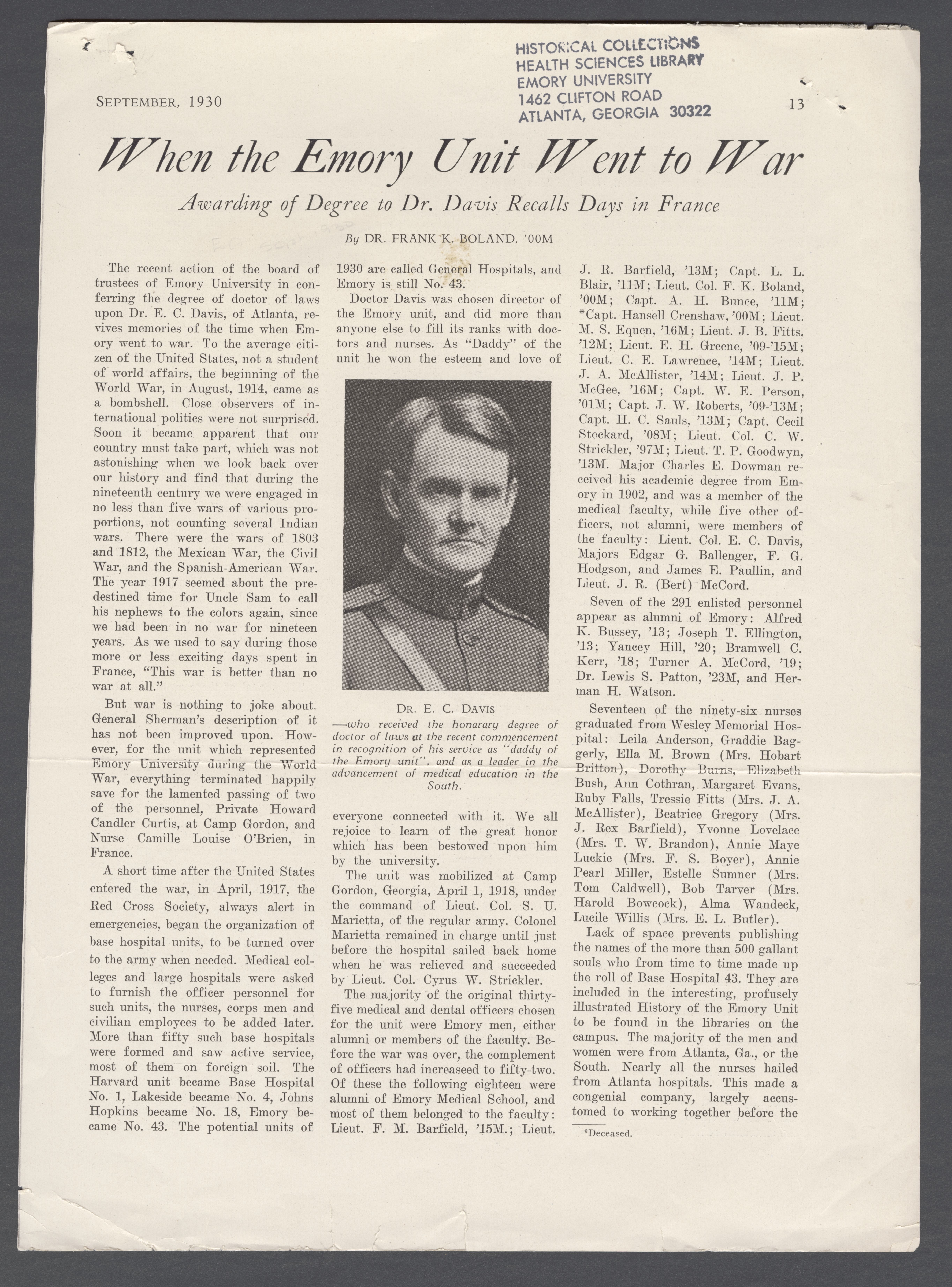 Seen Above: "When the Emory Unit Went to War;" article by Dr. Frank K. Boland, Chief of Surgery at Base Hospital 43. From Emory Alumnus, September 1930. Major E.C. Davis is pictured in article.

Born in Albany, Georgia in 1868, Edward Campbell Davis received his M.D. from the University of Louisville in 1892. Years later in 1898, he served his country as a surgeon with the rank of Major in the Spanish-American War. After the war, E. C. Davis practiced medicine in Atlanta, opening the Davis-Fischer Sanatorium that would later become the Emory Crawford Long Hospital (now Emory University Hospital Midtown). During this time, he held the rank of senior medical officer in the Georgia Militia. 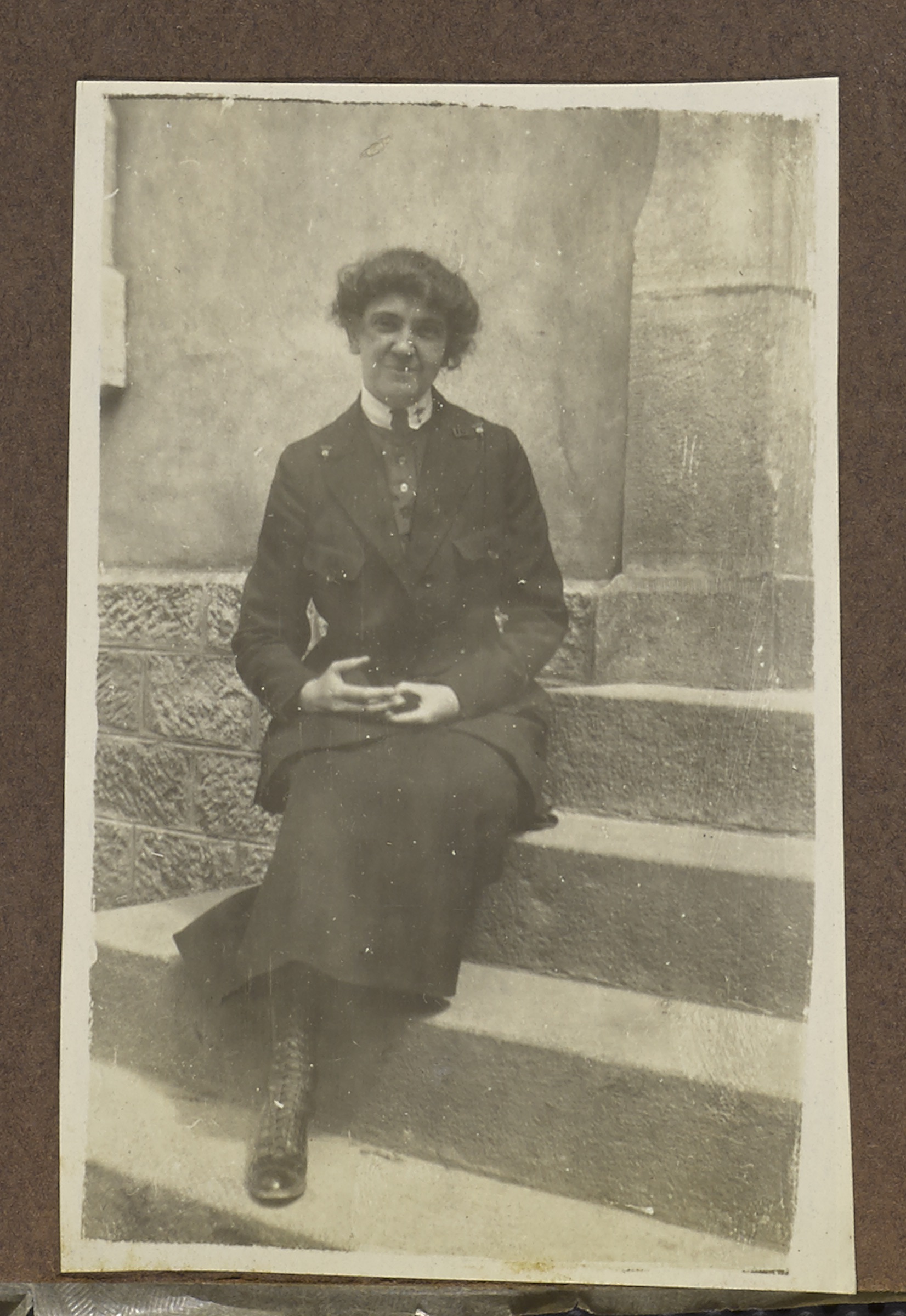 Leila Anderson graduated from Wesley Memorial Hospital Training School for Nurses in 1907. She alternated her time in Havana, Cuba and Macon, Georgia before enlisting in the U. S. Army Nurse Corps in April 1918. Anderson was assigned to the Emory Unit and served at Base Hospital 43 in Blois, France. Ms. Anderson was assigned to Annexes 29, 13 and Ecole Superieure. Ecole Superieure was added on August 31, 1918, and was to be the largest of the three surgical hospitals of the Emory Unit. Annex 29 served medical cases while Anne 13 served both orthopedic and eye, ear, nose and throat cases.

Evidence of Leila Anderson’s service, including the uniform she wore and her personal scrapbook are located at the Woodruff Health Sciences Historical Collections and provide a unique window into the experiences of nurses in the Emory Unit, ranging from casual moments with colleagues, to hospital scenes and images of devastation caused by war. After the war, she was Superintendent of Nurses of T. C. I. Hospital in Copper Hill, Tennessee.

Anderson wore the standard Red Cross uniform used during World War I, a gray cotton crepe dress worn with white pique collar and cuffs. In gray chambray, it was the uniform of the Red Cross public health nurses for all seasons. 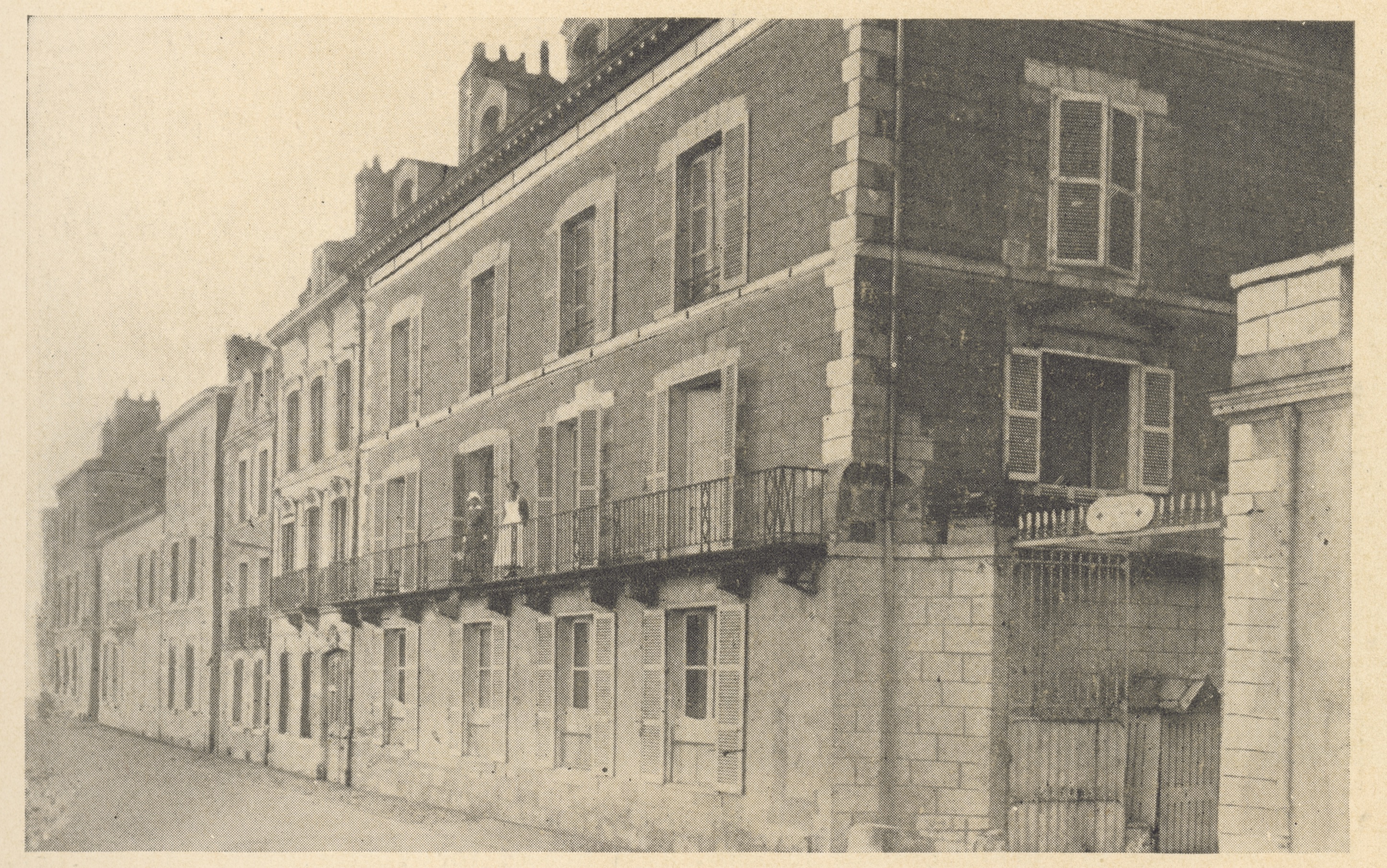 Seen Above: Nurses quarters located just a few steps from Annex No. 29

Activation and staffing of a base hospital was also the paramount need of the War Department for World War II. As early as June 1940, Emory University was requested to assist in this effort once more, and the Emory community answered. This version of the Emory Unit was more mobile than its predecessor, stationed in Algeria and Italy before moving to Aix-en-Provence, France after the Allied invasion of Normandy in 1944. Allied Forces had recently taken this area of southern France; German doctors and nurses staffed the hospital when the Emory Unit arrived. 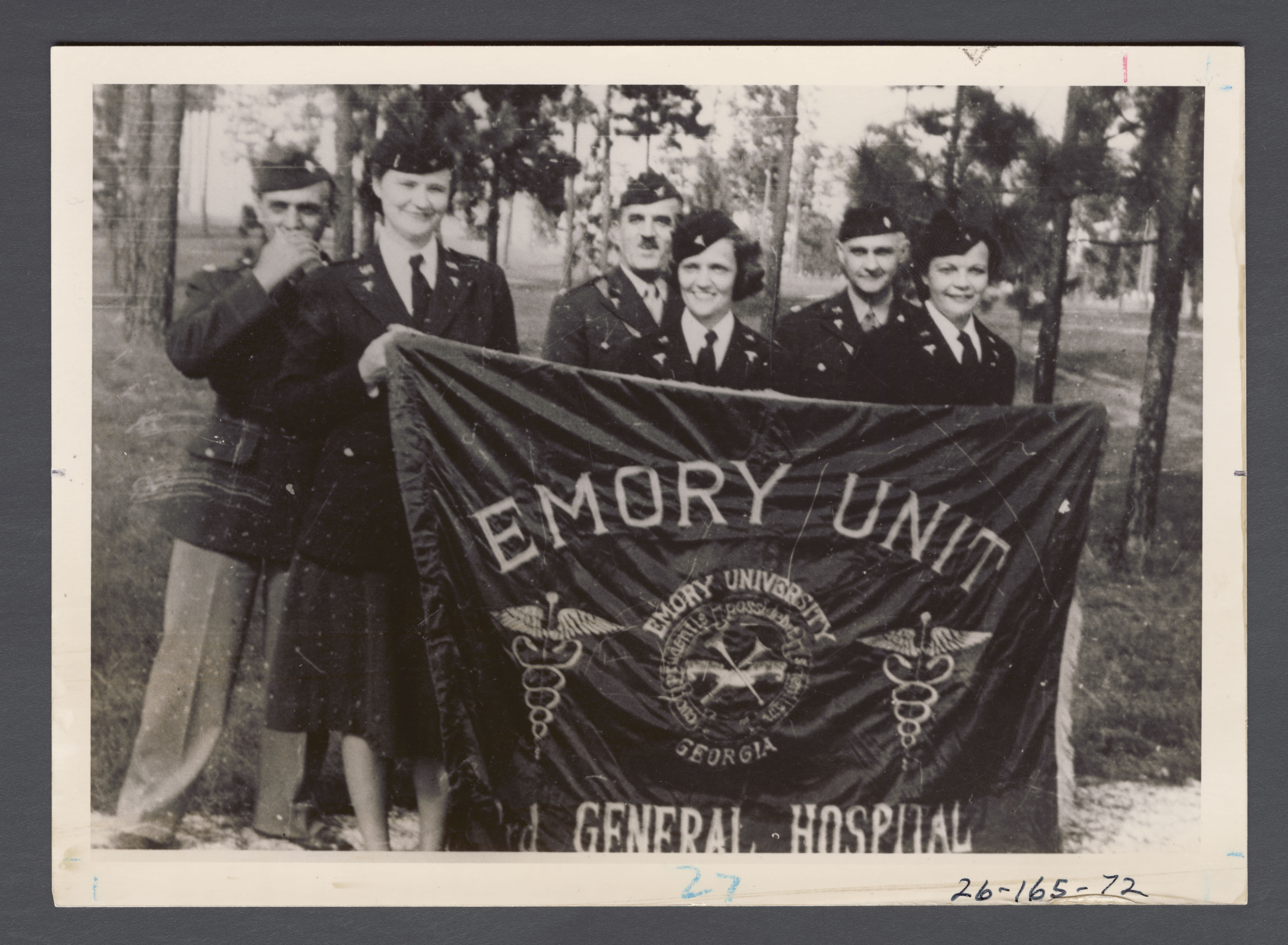 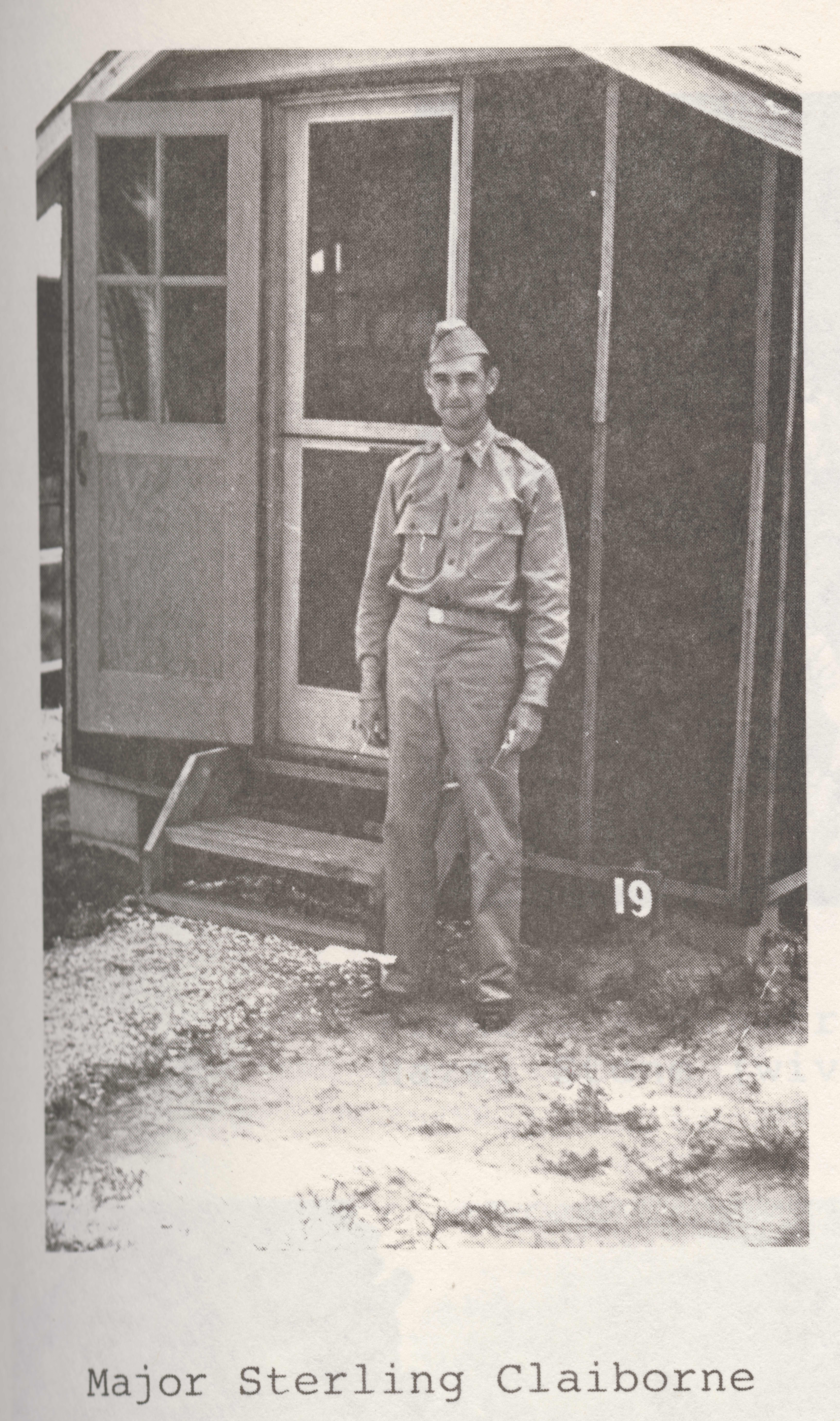 Born in Louisiana in 1908, Thomas Sterling Claiborne received his Doctor of Medicine degree from the University of Virginia before spending his internship at Massachusetts General Hospital and residency at the Lahey Clinic in Boston, specializing in Internal Medicine and Cardiology. In 1942, Claiborne felt the call to serve his country after the United States entered World War II. He volunteered to serve in the Emory Unit, 43rd General Hospital. Claiborne served as the chief of cardiology section, overseeing cases of rheumatic fever in Algeria, which he was later published on the topic.

Claiborne was also selected as one of eight medical officers to take part in the invasion of southern France in  August 1944. The medical officers, each with two enlisted men, boarded separate cargo ships, successfully reaching France while the territory was being reclaimed by Allied Forces. Claiborne and the Emory Unit would soon reach Aix-En-Provence. During the first ten days of operation, the 43rd GH was the only general hospital functioning in southern France.  Major Claiborne kept a diary that provides a detailed description of his time during the war. 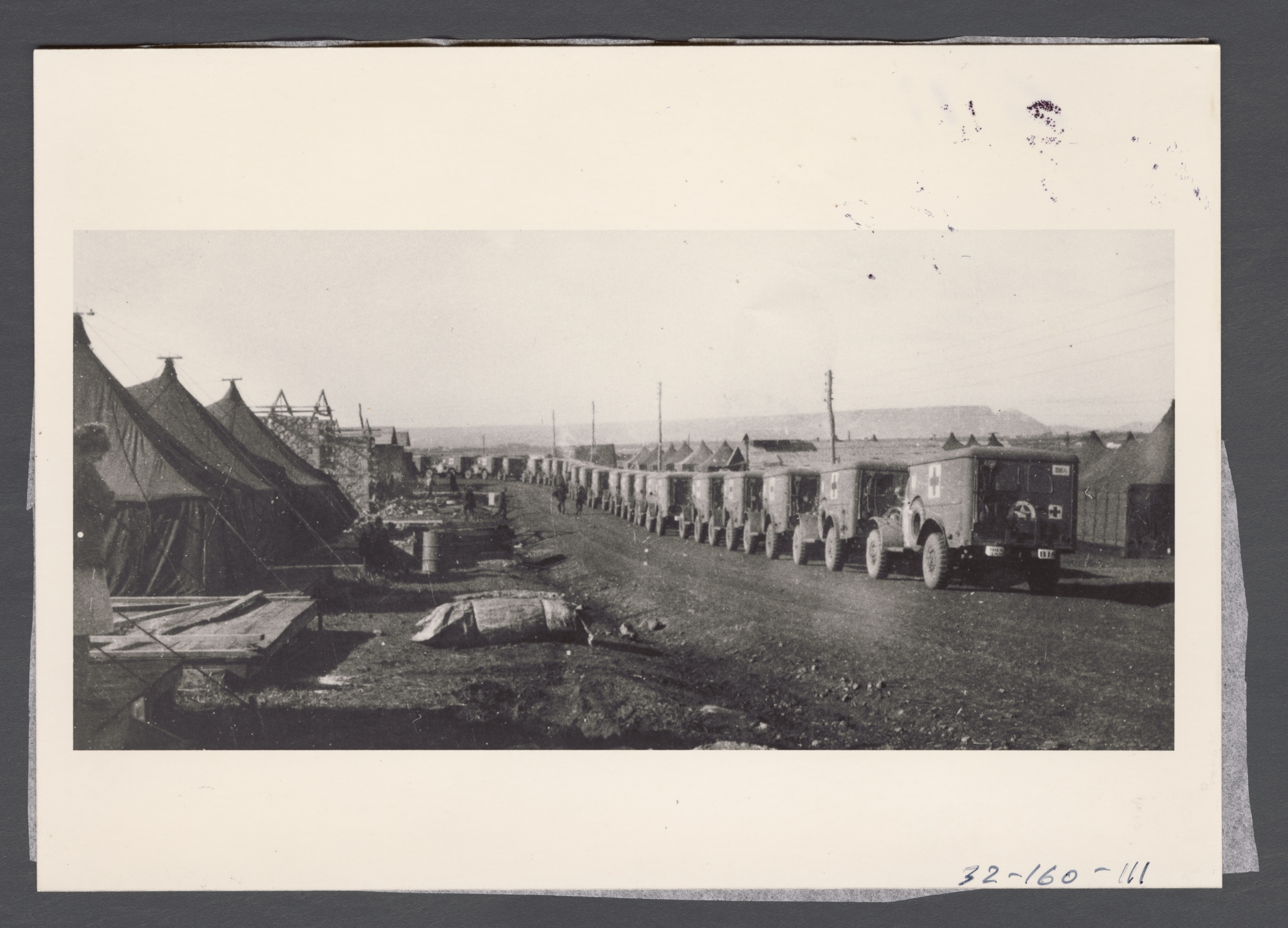